Tuesday: 4 miles in 43m, 3s with an average of 10:46 min/mi. We ran at the gym. I watched 2 1/2 episodes of the office and almost fell off the treadmill from laughter. I can do okay running 3 miles on a treadmill with only music, but anything over 40 mins and I need extra stimulation :). The Office was the perfect distraction and kept my mind occupied.

Wednesday: Crosstrain. It didn’t happen in the form of the 5am gym workout we had planned, but after work I did several sets of lunges, push ups, planks, sit ups, and bicycle crunches. I worked up a sweat and got some good quad work in (that’s my most necessary cross train to keep my knees and hips from getting strained!)

Friday: CT or Rest. We chose rest because Brian began noticing a weird pain in his ankle and wanted to give it a break. Last week was show week for our daughter and I had been running around like a mad woman from the minute I got off work until about 10 at night so I needed a little extra sleep :).

Long Run Saturday–8 miles in 1:35:32 with an average of 11:56 min/mi. This long run was a first. Brian’s ankle (read Friday) was still not 100% and he was scared of further injury so we decided it was best for him to sit this one out. Our friend was out of town. And I had no excuse :). I grabbed a portable charger for my phone, grabbed a water and a snack and headed out.

.2 in I had to stop to adjust my run/walk timer because it went back to default settings. .5 in, a lady decided to let her three dogs outside without a leash and they were less than friendly. The largest was a mix between a lab and a pittbull. He did not appreciate me running on his street. His growl was heard from the porch as he took off towards me. I don’t know where I learned this or if it’s even a defense tactic, but it worked so, runners, file this away! I stopped and planted both feet on the ground shoulder width apart and balled my fists up and put them near my face. I wanted to appear firm and strong. I yelled out at him in the deepest voice I could muster, as LOUD as I could, “GET BACK!”. He still came up to me, but his tail went between his leg and his bark/growl stopped. She called for her dogs and as they started to return to the porch, I tried to start running. The large dog turned to come at me again and I yelled again. I guess I was trying to establish dominance? I don’t know… but hey, it worked! I yelled at the lady and suggested she buy some leashes. She laughed. Oh well, I survived. BUT, I wanted so bad to call it a day and run back home.

But, I didn’t. I took off on the planned route and tried to focus on my breathing and my music and the solitude. I cracked up about 2 miles in when I saw a car in a ditch. It was something I knew my running buddies would appreciate so I snapped a pic :). 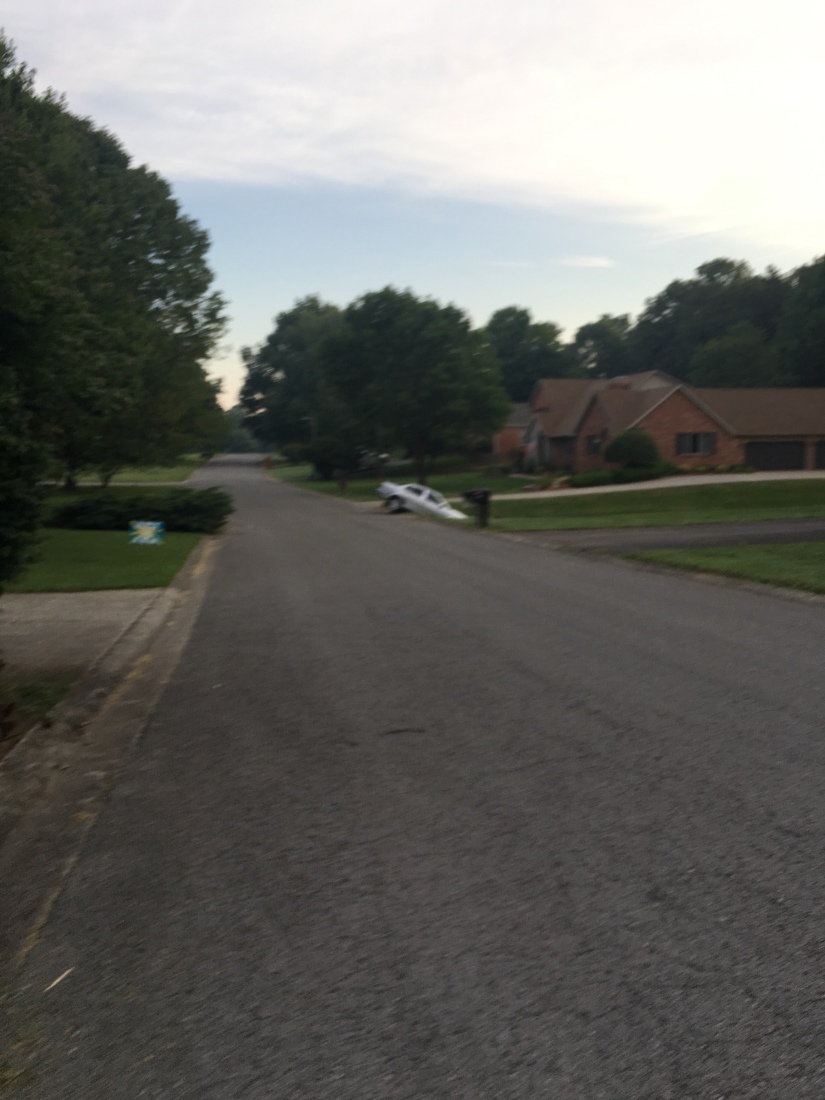 I prayed for God to meet me on the run. For it to be a special time with just Him and I. I’ve been wrestling with some questions lately. I’ll share more about that in a post in a few days, but I definitely got some clarity and peace and I was so grateful for that.

I arrived home to find my sweet husband had made me breakfast (and iced his ankle like he was supposed to!). I hated that we didn’t get to run together, but I was pretty proud of myself for running on my own!

Sunday: 3 mi EZ. Didn’t happen. Brian was still out of commission and I was exhausted in the morning and there was literally no other time during the day to get it in. Not a great excuse, but I figure my sleep and rest are just as important as checking a box on the training plan so I’ll take it when I need it, especially if it’s not one of the most important runs.

So, the final assessment of week 6:

I'm just a girl, a mom, a wife, but most of all a daughter of The King. I love coffee and very dark chocolate and sometimes I do things like run half marathons and write stuff. I also happen to have Multiple Sclerosis. My goal every day is to choose JOY! View all posts by Nora

The Not Today, M.S. Podcast!

Copyright © 2018-2020 Not Today, MS. Unauthorized use and/or duplication of this material without express and written permission from this site’s author and/or owner is strictly prohibited.